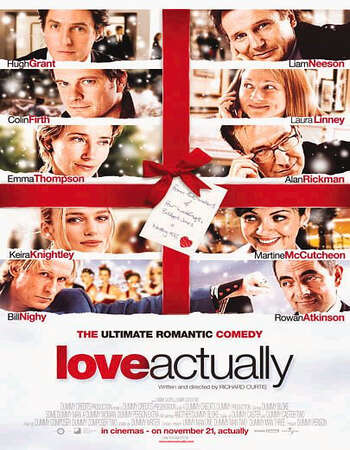 Story: Against the backdrop of aged has-been rock star Billy Mack’s (Bill Nighy’s) Christmas themed comeback cover of “Love Is All Around”, which he knows is crap and makes no bones about it, much to his manager Joe’s (Gregor Fisher’s) chagrin as he promotes the record, several interrelated stories about romantic love and the obstacles to happiness through love for Londoners are presented in the five weeks preceding Christmas. Daniel’s (Liam Neeson’s) wife has just died, leaving him to take care of his adolescent stepson Sam (Thomas Brodie-Sangster) by himself. Daniel is uncertain how to deal with Sam and his problems without his wife present, especially in light of a potential budding romance within their household. Juliet (Keira Knightley) and Peter (Chiwetel Ejiofor) have just gotten married. They believe that Peter’s best friend and best man Mark (Andrew Lincoln) hates Juliet, but won’t say so to his or her face. Others looking at the situation from the outside believe Mark is jealous of Juliet, as he is in love with Peter.