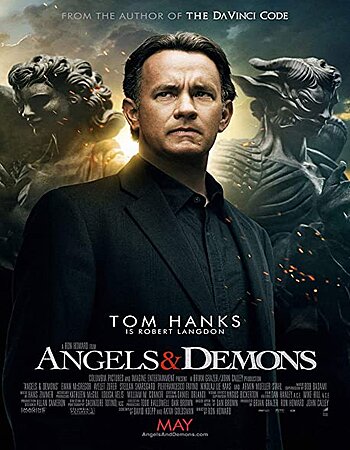 Story: Following the murder of a physicist, Father Silvano Bentivoglio, a symbolist, Robert Langdon, and a scientist, Vittoria Vetra, are on an adventure involving a secret brotherhood, the Illuminati. Clues lead them all around the Vatican, including the four altars of science, Earth, Air, Fire and Water. An assassin, working for the Illuminati, has captured four cardinals, and murders each, painfully. Robert and Vittoria also are searching for a new very destructive weapon that could kill millions.

The Pope is dead, and the conclave has been locked in to choose the new pope. Four cardinals are designated ‘preferitti’, and then are kidnapped by the assumed disbanded Illuminati. In the meanwhile, a powerful and dangerous prototype of antimatter has been stolen. Robert Landgon (Tom Hanks) is called upon once again to solve the crime and prevent mass destruction.
At least Tom Hanks got a haircut this time. The science is laughable. So at least that matches with the rest of the story. The locations are great, and the action helps push the story out in the end. I could almost forgive all preposterous stuff in this movie.